Blog - Latest News
You are here: Home1 / Safety2 / How common is this – When Safety Stupidity trumps common sense

I was conducting a site OSH inspection of a cattle station owned by a large and renowned international company.

Owning and managing cattle properties was not their core business.

We all know that manual handling activities are very common on pastoral properties , especially when loading the heavy items such as bags of cement, feed and 405 litre drums of diesel into back of the Short Wheel based Toyota Ute.

The best way to eliminate the risk of manual handling injuries  is to – guess what – use a lifting device.

The station ute tray was fitted with a small electric hydraulically powered VMC crane. This is a very common use case in Australia

It was noticed that the electrical power was disconnected and the hydraulic system deliberately disabled.

I was advised that the company safety advisers had done a risk assessment and found that ensuring station personnel were trained and competent to  operate and maintain the crane, posed an unacceptable risk compared to manually loading the ute using two persons to place heavy loads or dropping the load into the ute using the bucket attachment of a bob cat.

It was obvious that removing the heavy load from the ute tray was not even considered.

It was noted the the station hands were never involved in the risk assessment and decision to disable the crane hydraulics.

There was no doubt in my mind disabling the crane hyraulics  would have encouraged short cuts being taken by the station hands. 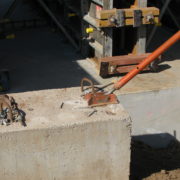