A Grid Mesh Clip is a clip which is used to hold a piece of grid mesh flooring by clamping the mesh to the supporting structure – the mesh is held in place by the clamping force – friction.

The style of the clip I am talking about is one that is screwed up tight by an battery operated screw driver on the clamping bolt.

Before you read on – what can go wrong here??

During a routine walk around of a construction site – a single grid mesh clip was observed in a barricaded area on the concrete floor of a large screen house (30 m X 30 m). The floor was absolutely clean.

Question – where had it come from, had it fallen from above?

Some days previously the floor above had been covered in grid mesh panels and clamped into place with grid mesh clips.

The floor area had been examined at the time and found to be installed safely and had been opened for general access.

There had been a fatality on this site several weeks previously when a person stepped on loose (unclamped) grid mesh which moved out of position and he fell to the floor below. This area was still under construction and had not been opened for general access.

In many circumstances this single clip would have been ignored by construction personnel and put down to poor housekeeping but in this case, being lazy about the situation was not an option for me as I am a curious cat and will follow leads until an explanation was evident.

I teamed up with the area construction superintendent and we examined the floor above to see if there were any loose panels or missing clips.

Some panels were found have at least one loose grid mesh clip (out of a minimum of four clips per panel) and in some cases more than one loose clip per panel – pretty scary!!

The entire building was examined and many loose panels were found and some had lost grid mesh clips.

The reason why the clips came loose is that they were over tightened to such an extent that the clip was bent in severely and lost structural integrity and consequently lost contact with the adjacent structure, allowed the panel to become loose and in some circumstances allowed the clip to fall out through the grid mesh.

Why were the clips overtightened and bent out of shape?

Installing grid mesh clips is a boring and repetitive, long job and assigned to any available trades assistant. No initiative was required, they did what they were told and then left alone.

The trades assistants had no training or understanding of the importance of doing the task correctly every time and the torque type screw driver had no torque limit on the force it could apply to the screw.

In this case – astute observation, questioning and seeking real answers paid off and we avoided the grim reaper. 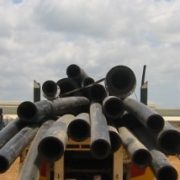 Are your documents understandable?

Occupational Health and Safety Audits – Are they value for money?

A Flexible Load and Over Centre Scissor Clamps – A Dangerous Combinat...