Blog - Latest News
You are here: Home1 / Asbestos2 / How to find an asbestos “Needle” in a mining “Haysta...

This story  summarises the applied research work to determine the presence of crocidolite asbestos in a maiden untouched iron ore deposit located in the Pilbara in Western Australia.

The purpose of the exercise was to assist mine planning to manage / avoid the risks of encountering asbestiform minerals – principally blue asbestos (crocidolite).

The iron ore deposit was high grade and had previously been drilled out on a matrix of drill holes spaced about 400 metres apart many years earlier.

Asbestiform minerals had been encountered during this drilling program

It had been determined that further infield drilling was required to more accurately define the grade and location of the deposit as part of the definitive feasibility study – leading to significant CAPEX commitment to mine the deposit.

I had an industrial hygiene background and conducted basic research (in conjunction with the Principal Project Geologist) into the possibility that crocidolite may be associated with this deposit – The primary document referred to was “Bulletin 119” published by the Geological survey of Western Australia and authored by A Trendal and G Blockley – Titled :The Iron Formations of the Precambrian Hamersley Group Western Australia with special reference to the associated crocidolite” and was published in 1969.

The publication indicated that this type of iron ore deposit may be associated locally with the presence of crocidolite.

As a result, I designed a dust sampling methodology to determine the broad location of crocidolite seams (by depth in the drill hole) and to be able map the presence of crocidolite. This technique was locally designed and it was determined that this had never been done anywhere else in Australia or the world. It was not known at the time if the dust sample capture and analysis was sufficiently sensitive to determine the presence of very small amounts of asbestiform fibres, as large amounts of dust could be present on the dust sample filters, potentially masking small numbers of asbestiform fibres.

This method was literally a “stab in the dark” – but was based on solid advice from a Perth Based analytical laboratory whose staff who were highly experienced in manually identifying asbestos fibres (backed up by SEM/TEM analysis) and my experience in the dust sampling of exploration drill rigs and conducting a similar exercise but much smaller elsewhere in the mid-1980s.

All drill holes depths were extended from the planned depth by approximately 20 metres to ensure that localised crocidolite seams beneath the ore body could be determined and assist with mine planning design.

Over 1000 dust samples were sent to the offsite laboratory for fibre identification of which over 900 were subject to SEM/TEM analysis.

During the drilling program visible crocidolite was observed on several occasions. When this occurred, any dust samples associated with the location and depth of the visible observation were analysed as soon as possible.

When the laboratory results confirmed the visible sighting, the priority dust analysis was extended to surrounding drill holes. This was very successful in detecting crocidolite and allowed the trend to be followed and the seam location mapped at early stages of the project.

The dust sampling and analysis exercise identified the presence of crocidolite on several occasions and proved that small seams of crocidolite (invisible to the naked eye in the field) could be detected and the location mapped.

We found the needle in the haystack! 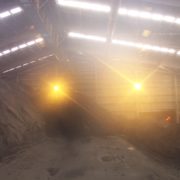 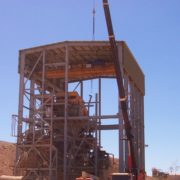