Blog - Latest News
You are here: Home1 / Dropped Load2 / A Flexible Load and Over Centre Scissor Clamps – A Dangerous Com...

Back at the beginning of my safety career  I investigated a dropped load incident where a 25 metre length of rail line fell whilst the rail was being lifted by a crane into position as a replacement item for an iron ore screen ore bin tripper rail.

The rail became detached from the rigging and dropped vertically  from a 30 metre height – like a spear – just missed the crane operator’s cabin by about 5 metres and penetrated the ground nearby to a depth of at least one metre – looking like a giant candle stick.

The rail is shaped with a head (wearing surface). The rigging was very simple and consisted of two slings , each with an over centre scissor clamp which were clamped around the rail head at two points – to ensure the load was evenly balance then lifted by the crane.

The interesting thing about a long piece of railway line is that is quite flexible – it does not behave like a rigid piece of structural steel – It flexes  and moves around during the lifting process.

The over centre scissor clamps work on weight / gravity – when a load is applied by the rigging to the clamp – it grips the object very tightly ( in this case the rail way line)   – If weight is taken off the clamp at any stage the clamp tends to open and does not grip the object and the object can come loose from the clamp.

During the lifting process, the rail line started to flex – like a wave – with the amplitude of the flexing continuously increasing – from one end of the rail line to the other end.

When the rail line flexed, the load was temporarily taken off one clamp which enable the clamp to open slightly and start to walk along the rail.

This occurred for both clamps – one end of the rail to the other end – and the section of rail literally walked out of the grip of the scissor clamps – this was a slow motion exercise , could be seen by the crane operator and the rigger.

Once this wave motion started – nature took its course – hard to stop unless the load is landed very quickly.

The rigger and the crane operator learnt a very severe and free lesson that day on the dangers of using over centre scissor friction clamps on flexible loads. 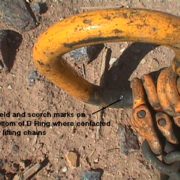 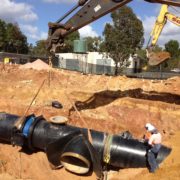 Grid Mesh Clip – A Fatality in Hiding
Scroll to top