Our construction team was conducting Confined Space  “Hot Work” – Oxy cutting, welding and grinding” inside a vessel when there was a very sharp and loud bang “Explosion” type of noise.

The vessel was constructed of an external steel shell which was protected by an internal rubber lining as the vessel contents normally included an acidic process plant fluid.

The standard gas testing had been conducted in the Confined Space including LEL explosive gas testing and nothing was detected.

During the investigation it was found that the vessel rubber lining had failed at a joint – it was a very small area.

Now for the basic high school chemistry – when an acidic solution contacts steel / iron, one of the by- products may be hydrogen gas.

It was determined that this has occurred.

Hydrogen has the well-known and in our case; the interesting property of being lighter than air and of course rising and being captured at the higher points in the vessel.

The vessel had been ventilated and was under continuous forced ventilation during the hot work.

But the ventilation was not up through the top of the vessel – it was from the entry and several exit points and was not able to remove the small layer of hydrogen which had collected above the work areas.

The small hydrogen layer was not detected by the LEL gas testing.

As soon as a hot spark hit the hydrogen / air interface – the hydrogen reacted violently with a loud explosive noise – no one was hurt. 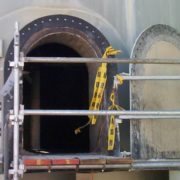