We (the construction contractor) had to do a cut-in to the client’s tank and enter the tank under a confined space entry permit drafted by the client.

The vessel had been cleaned out by the client – but still had some residual and deemed “Non Toxic” sludge in the hard to get at areas.

Forced ventilation was applied for at least 30 minutes to provide an acceptable atmosphere to the employees prior to entry and was to be continued when personnel had entered the confined space.

We did our own gas testing which was conducted prior to entry. The standard  gases tested were Oxygen , Flammable / Explosive gases LEL, Hydrogen Sulphide and Carbon Monoxide.

The main gas being targeted was Oxygen.

The gas testing was OK for and all gases except one – oxygen – and that did not make sense – the reading was negative!!!

Gas sensors were checked – another calibrated meter used and forced ventilation of the vessel continued for another 30 minutes – no change – this oxygen gas reading was still negative and appeared to be increasing on the negative scale.

Everyone was getting a bit testy by this time as the client had to get this vessel back into production and delays were looming.

I did not allow anyone into this vessel until this matter had been sorted out.

Eventually the client’s occupational hygienist was contacted and he proceeded to explain to the exasperated contractor that the vessel sludge was reacting with the oxygen in the air and produced a toxic gas – which we could not measure – the more air added into the vessel – the more toxic gas was produced!!

We had to enter the space using full self-contained breathing apparatus – as it could not be completely cleaned out. 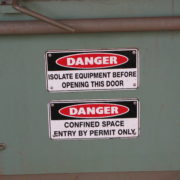