Several hundred pre-cast concrete reinforced panels had been craned and installed without any obvious safety issues when a panel detached from the basketed flat sling arrangement and fell to the floor below.

The slings had not failed, it was obvious that one sling had slipped towards the centre of the load allowing the load to slip out of the supporting flat slings.

This is a story of successive human and organisation errors, which resulted in the event and is about the knowledge, reliance and application of friction to secure lifting slings to loads.

The attached video supplied by the Department of Mines, Industry Regulation and Safety – Western Australia on “Friction” relates to this incident. https://vimeo.com/108303043

There are several obvious points in this sequence of events, where human intervention would have prevented the incident from occurring. 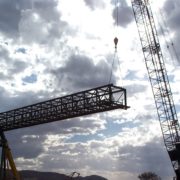 Fall Though a Roof – A Family Crisis
Scroll to top